R | 1h 26min | Action, Comedy, Crime | 22 May 2020 (USA)
2:31 | Trailer
6 VIDEOS | 19 IMAGES
A couple (Issa Rae and Kumail Nanjiani) experiences a defining moment in their relationship when they are unintentionally embroiled in a murder mystery.

What to Watch If You Love 'Inception'

Here are three streaming picks that capture the spirit of Christopher Nolan's mind-bending masterpiece in their own way.

May Picks: The Movies and TV Shows You Can't Miss
a list of 33 images
updated 3 months ago 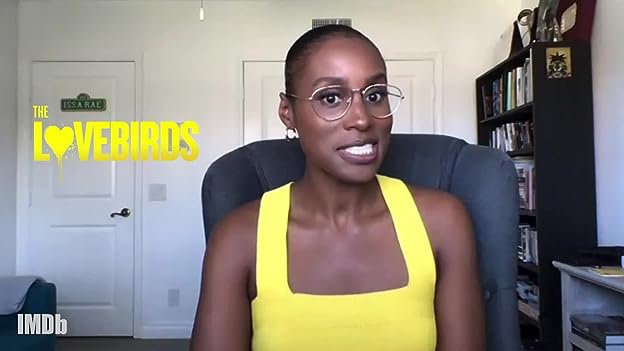 IMDb sits down with The Lovebirds stars Kumail Nanjiani and Issa Rae to see if they can guess classic partner-in-crime movies, based only on their IMDb keywords.

Tim thinks he's invited the woman of his dreams on a work retreat to Hawaii, realizing too late he mistakenly texted someone from a nightmare blind date.

A panicked young woman, with her reluctant friends in tow, rushes to Mexico to try and delete a ranting email she sent to her new boyfriend.

When carefree Nyles and reluctant maid of honor Sarah have a chance encounter at a Palm Springs wedding, things get complicated as they are unable to escape the venue, themselves, or each other.

Pakistan-born comedian Kumail Nanjiani and grad student Emily Gardner fall in love but struggle as their cultures clash. When Emily contracts a mysterious illness, Kumail finds himself forced to face her feisty parents, his family's expectations, and his true feelings.

When aspiring musicians Lars and Sigrit are given the opportunity to represent their country at the world's biggest song competition, they finally have a chance to prove that any dream worth having is a dream worth fighting for.

Twelve-year-old Kareem Manning hires a criminal to scare his mom's new boyfriend -police officer James Coffee - but it backfires, forcing Coffee and Kareem to team up in order to save themselves from Detroit's most ruthless drug kingpin.

When smart but cash-strapped teen Ellie Chu agrees to write a love letter for a jock, she doesn't expect to become his friend - or fall for his crush.

A detective recruits his Uber driver into an unexpected night of adventure.

Follows the awkward experiences and racy tribulations of a modern-day African-American woman.

The beloved superintendent of New York's Roslyn school district and his staff, friends and relatives become the prime suspects in the unfolding of the single largest public school embezzlement scandal in American history.

Scott has been a case of arrested development since his firefighter dad died. He spends his days smoking weed and dreaming of being a tattoo artist until events force him to grapple with his grief and take his first steps forward in life.

A couple (Issa Rae and Kumail Nanjiani) experiences a defining moment in their relationship when they are unintentionally embroiled in a murder mystery. As their journey to clear their names takes them from one extreme - and hilarious - circumstance to the next, they must figure out how they, and their relationship, can survive the night. Written by Paramount Pictures

All They Wanted Was a Quiet Night Out

Rated R for sexual content, language throughout and some violence | See all certifications »

Issa Rae and Kumail Nanjiani starred for the first time together. See more »

When sitting in the diner discussing what to do, Leilani and Jibran are served milkshakes which can be seen in front of them. As the camera goes back and forth during their conversation, Leilani's milkshake turns into a plate of french fries. Neither character ordered french fries. See more »

I was hopeful, going in to The Lovebirds, because I'd read reviews praising the chemistry and likeability of the leads. That they are likeable is true enough, and there are a couple of jokes in there somewhere too but the plot is weak and, for a short feature film, it dragged like hell. I thought it was about 25 minutes longer than it was. The best bits are when they couple are just talking about their problems. They could have made a modern Before Sunrise, but instead they made a bellow average murder mystery. Shame.

This FAQ is empty. Add the first question.
Edit